The cutting head Long-Dwell type is designed for high-speed packaging with hard to seal film and where an airtight package is required.

The system allows the sealing bars a longer sealing time compared to the classic rotative cutting heads.
The "D" type cams allow the sealing bars a translate movement beyond the rotative portion.
The LMC builds this unit for different companies in packaging machines and also for special customer requests.

The sealing bars remain in full engagement for about one third of rotation cycle and the knife divide the packages. The flat part of the "D" type cams corresponds to the sealing length.

POSITION AFTER SEALING
At this point the sealed parts has been cut, separated, and released to the delivery belt.
The sealing bars continue their movement with rotative movement in the circular portion of the "D" type cams.
The LMC produces also horizontal wrapping machines for polypropylene and polyethylene film, cutting heads units, pulling and sealing wheels units, differential for registered film, different spare parts for wrapping machines and special machining on equest. 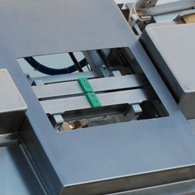 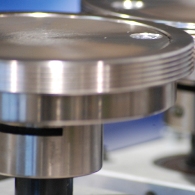